“What is done is best to be done on both sides…and all at the same time.”

Well, not really. Not if you want to do any of it well — but that’s a lesson I learned the hard way.

I reentered the workforce from my full-time (and favorite) mommy gig when my youngest (of four) started school just six short years ago. I was fortunate enough to land myself in a remote position with a company that brought my second passion (storytelling) to life in a unique and remarkable way.

I was finally able to merge the best parts of myself personally and professionally from the comfort of my happy little chaotic home. Now, how that actually played out is another tale for another day. I’m here to tell you about how everything changed when Baby No. 5 joined my families… my nuclear and my work-family.

I admit I was determined to maintain my professional course. And I felt unusually blessed to work from home so I could find my balance between growing in my career and nurturing a brand new life — especially since I knew I would breastfeed. 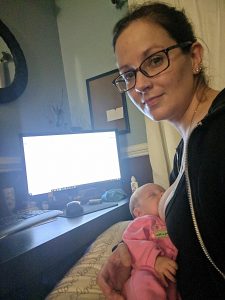 Remarkably, 4 out of 5 babies born in the US start out breastfeeding, according to the 2018 Breastfeeding Report Card by the CDC. Unfortunately, that number is reduced by half by just three months. There are numerous reasons why breastfeeding doesn’t work out for mothers and babies. It’s fair to say, however, the progressive movement of women in the workforce contributes to these challenges for many mothers who struggle to breastfeed as long as they had planned.

In fact, nearly half of the labor force in the US is comprised of women, 75 percent of those women have children under the age of 18 at home, and 40 percent are the primary income earner in their household. Hats off to you, ladies!

In honor of National Breastfeeding Awareness Month, I want to pass on some of the lessons I learned this past year while breastfeeding as a working mother.
Your picture of perfect needs to be fluid

I was a veteran. I breastfed my oldest four children well over a year for a collective six years. I was arrogant. I thought I was a fortress against the gnashing emotions that follow childbirth and latch — figuratively and literally — to the breastfeeding experience.

The reality is everything I thought would come so easy nearly broke my spirit every day. I struggled to meet deadlines. I struggled to bond with my daughter. I was constantly available to my highly-demanding baby and I never left work.

It was exhausting. There was nothing romantic about remote work and nursing my newborn. I wanted to give up.

I truly believed I was failing at everything. I was letting everyone down. Finally, at one of my lowest moments (one of those ugly crying from tired eyes over sore boobs in the shower kind of epiphanies), I realized I was actually… grieving. I was desperate for the picture of perfect I painted in my mind but couldn’t materialize.

I wasn’t failing at all. My baby had enough milk. My clients had enough content. My co-workers had enough of my attention. I had enough support. And most importantly, I was enough.

You don’t have to juggle all the balls at once 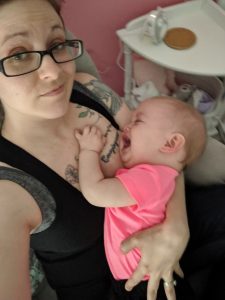 My daughter and I faced a number of unexpected challenges on our breastfeeding journey, from a tongue and lip tie to milk production issues to food sensitivities and allergies to breast infections and biting (ouch).

Any one of these obstacles felt certain to derail my sanity and definitely impacted my work productivity. At first, I thought I would block out my tasks — but that proved nearly impossible when I was nursing on-demand. So I opted to try to work while I breastfed — but that often resulted in tasks taking longer than they should to complete or errors from dividing my attention.

Not to mention, I spent all of my time trying to nurse while I worked and worked until I had to nurse again. That left little time for basic self-care and monitoring my own mental well-being. There were just so many balls and I thought I had to have them all in the air at once.

The trouble was when I tried to put them all down, I didn’t know what to do with my hands. I was at a complete loss of how to be productive in a healthy way. The trick was finding my groove and trusting my team to help me keep it.

I made a list of what I needed to feel focused, energized, and effective. And I worked with my husband, and children, and co-workers, and boss to stay on track. Sometimes they held some of the balls, sometimes they tossed them to me, sometimes they made me stop juggling altogether — the point is I never dropped them because [together] I had more hands than tasks at hand. 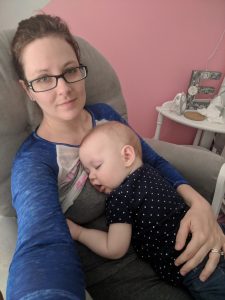 Years ago — a result of heeding the hard lessons of parenthood — I learned it’s good to be ambitious but it’s foolish, devastating even, to define yourself by those pipe-dream goals. My 20-year-old-self scribbled bucket lists and researched potential salaries and planned to be a whole other person in a different world than I am today. I have lost nothing by making lists I didn’t check off.

I know this for a fact. Yet, I started into the last year with a new list every day that would bleed off the page no sooner than I’d find hope I’d succeed. OK, that’s the dramatic interpretation.

The reality is, I was filled with hope and all sorts of crazy hormones and emotions that come with bringing a new baby into the world, not to mention I was delirious from sleep deprivation. I had also just started on the journey of a lifetime with two of my best friends, setting a business sail that would carry us hell-or-high-water to our wildest dreams…no less dramatic but it’s an incredible story.

Needless to say, not checking off my lists was draining me as fast as my voracious infant daughter. Faster even, as the stress of not checking off all of my tasks was rapidly reducing my milk production and impacting my ability to continue breastfeeding.

I didn’t move my tasks. I let them fall into the ‘late’ bin. And I worked from there until I did it all. Then, as I waded my way out, I started to make lists again.


Say it with me now…”you’re amazing, Mama” 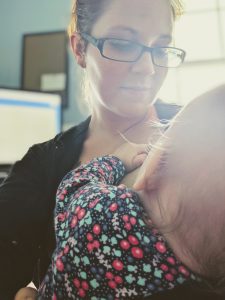 Ultimately, mama’s… my story isn’t over yet. And neither is yours.

Maybe you just started on your breastfeeding adventure. You’re working from home with a picture of perfect in your pocket and a dozen balls in the air. Use your resources.

Maybe you’re on a schedule. You might have a list-inception. You could be pumping or supplementing. You might even be working at the office a few days a week.

You could be struggling to believe you are producing enough, productive enough — but you are. You are enough. And you can only do what you can do.

Do that. And be proud of what you accomplish. Whether you check a box or just scribble a note to pick up more nipple cream — there, I said it, it hurts.
Working remotely and on-demand.

Working on demand and nursing when you can. Pumping at the office and nursing at the end of a hard day. Formula feeding and working. Working hard at being a mom. You’re doing it. And that’s amazing.

Posted in awareness, health and wellness and tagged breastfeeding tips, tips for breastfeeding, working moms, working remote
← The End of Instagram ‘Likes’ May be NearYou Need to Get It Right in Digital Content: Here’s Why →

I'm the editorial and visual director at Ride the Sail Marketing. I've always enjoyed the challenge and thrill associated with the command of words on human emotions. When I'm not editing, designing, or drafting for RSM and our amazing clients, I'm nurturing the love of reading and writing in my personal tribe of tiny humans, or making music. Thanks for visiting our blog!