You know visuals are an important part of content marketing. So you look for the right graphs and photos to break up the copy of your blog pieces. And you always go to the best designer when you’re creating an infographic.

You also know social media is one of the most effective ways to promote your content. So you research hashtags and the perfect times to share posts. You even actively engage with your followers so they’ll be more likely to pass your content on to others.

No one is reading your content. No one is liking or retweeting it on social media.

This is because you’ve approached visual communication and social media as two separate entities when in reality, they are very much related. You need to consciously think about how the two can work together to improve your content marketing strategy.

Let’s start with the basics. Here are a few considerations to help you understand the importance of visual social media:

Despite recent changes to its algorithm, Facebook is still a social media juggernaut. It has the most users (as of September 2018, the company reported 1.49 billion daily active users). Since June 2015, Facebook has also been responsible for more website referral traffic than even Google, according to a report from Parse.ly.

While that means there are a lot of marketing opportunities on Facebook, it also means there’s a lot of competition. And if you’re not including images with your posts, you will be at a disadvantage. In fact, a 2017 report from Buzzsumo found that a piece of content with an embedded Facebook thumbnail image receives over three times as many shares.

If you need more proof of the power of images on social media, just look at Instagram. The platform — instead of being text- or link-based — is devoted to images and receives higher average engagement rates than other platforms.

According to a 2017 report from Locowise, the engagement rate on Instagram is 1 percent. This means, on average, 1 percent of the user’s followers liked or commented on their shares. While that number might seem low, it’s actually very impressive. The same report found that the average engagement rate on Twitter and Facebook was 0.13 percent and 0.59 percent respectively.

One way to explain this difference is that on the other platforms, you don’t need to include an image in your post. So all those shares and tweets that don’t have a photo intrigue followers less and lead to fewer engagements. 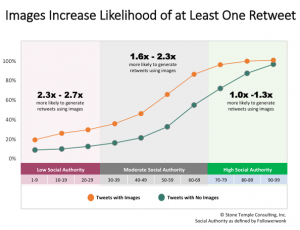 One of the most frustrating things about starting out on social media is gaining traction. You have to wait for your small group of followers to retweet your shares so they can get in front of more eyes and build your reach and following.

A way to make this happen faster is to use images in your tweets. When you have a high social authority — or a large following and good reputation on Twitter — numbers are what drive your chances of receiving engagement. Out of tens of thousands of followers, the odds are at least some of them will retweet the content.

With low social authority, it’s images that encourage engagement. A 2014 study by Stone Temple found that for accounts with fewer followers, a tweet with an image was 2.3 to 2.7 times more likely to get retweeted.

Even if you’re not on Pinterest, your images are

Many companies overlook Pinterest. They think it’s just for craft or fashion businesses (that’s not true, but that’s a topic for a different time). And because of that, they never give the platform a second thought.

But the truth is, most images on Pinterest don’t come from the 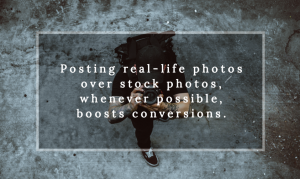 original creators themselves. Research, presented at the 2016 Conference on Information Systems Applied Research, found that only 14.35 percent of pins are actually created by registered users. The majority of the shares on the site are bookmarked from other online sources and then repinned around the platform.

This means there could be a whole group of people engaging and interacting with your content and images that you don’t even know about.

Originally, the image-based platform was just about chatting with friends. But now, Snapchat has become a valuable tool for marketers. It might have taken businesses a while to learn how to best utilize the social platform, but users are ready to see what they have to offer.

Now that we’ve looked at what’s true about visual communication and social media, let’s consider the misconceptions. Here are some common myths that could be hurting your organization if you believe them:

On the surface, stock images seem like a great way to incorporate images into your social media plan. It’s easy to find a wide variety of photos, and there are dozens of sites that offer images for free.

But if those are the only images you’re using, it can hurt you in the long-run.

A 2015 case study of 160 Driving Academy compared the number of desired conversions the company received on their website and social media when they used photos they had taken themselves versus when stock images were used.

The results were impressive. When the company used real photos, it lead to a 161 percent increase in conversions for the business.

Logically, this makes sense for a few reasons:

Tip: If you absolutely have to use a stock image, find a way to customize it. There are tools like Designfeed.io and Snappa that allow you to add relevant text and logos to stock photos so they’re unique to your company.

Images and graphics with text incorporated in them can be great visual communication tools. However, while the words should never overshadow the image, they can’t be taken for granted either. Make sure the fonts you use not only are appropriate for the message you’ve created but also align with your organization’s branding.

Sure, most people don’t know the difference between Calibri and Cambria, but their eyes can recognize if what you choose isn’t visually-pleasing in a certain context.

Also, don’t overwhelm your audience by using several distinct or over-the-top fonts all in one image. That makes it hard for them to focus on the information and process the message.

There is nothing wrong with promoting the same content time and again. Doing this gives people who missed a share the first time around a chance to see the content. You can even recycle shares that have proven to be especially popular with your audience.

What you don’t want to do is use the same image repeatedly in a short period of time. If someone comes across one of your social media pages and sees the same image twenty times, they’ll assume you don’t have much to offer besides that piece of content.

Cycling through a variety of content gives people a visual clue that they’ll get a lot of great information if they follow you on social media.

Spice things up even more by using different images to promote the same piece of content. Research from Buzzsumo found that content with images every 75-100 words gets the most shares on social media. Given that, you should already be using multiple graphics and photos in your content.

When it comes time to promote the content on social media, associate each of those images with one of your shares. This will keep your newsfeed from ever appearing boring or repetitive. 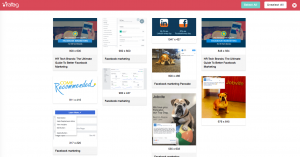 Tip: There are some social media scheduling tools like Viraltag that are dedicated to making it easy to share visuals on social media. The platform allows you to match up shares with any image in a post and then schedule them.

Myth #4: All images look the same, despite the device they’re viewed on

I have to admit, social media has come a long way with image consistency since smartphones first came on the scene. When social media went mobile, there were constant problems with images displaying wonky.

But now, it’s almost impossible to find an image format that won’t load via social media on a mobile device. However, there are slight differences in the dimension across the platforms and their mobile counterparts.

This is particularly important on Facebook. Take a look at the image below. This is the desktop view of a fake company page I set up.

Note: This took me 10 seconds to make. Please take more time and consideration when choosing the images for your page.

Now take a look at the same page as it appears on mobile. 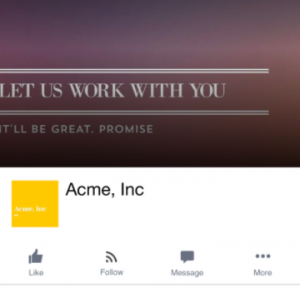 Notice how part of the cover image is cut off on the mobile display. This is because the dimensions of a cover image are different on desktop and mobile. The images you choose for your company page can really affect how professional you appear. It can also cut off key parts of your brand messaging.

And if you think the difference on mobile doesn’t matter, think again. A 2016 comScore score report found that 79 percent of time spent on social media is spent on a mobile device.

Kristen Klempert is currently a Marketing Analyst at Clever Real Estate and a former Ride the Sail Content Rockstar and Social Media Maven. You can follow Kristen on Twitter or Instagram for her thoughts on the world and photos of her dog, River.

View all posts by Kristen Klempert →